Rooted in history and truth

Being true to the origins of the site has resulted in an exceptional redesign of the KPMG offices in Perth, Western Australia.

Woods Bagot’s recent redesign of KPMG’s Bishop See office in Perth, WA is a clear demonstration of what it means to be site specific. Not only has the space been designed to enhance the new agile and more connected working culture of this global professional services giant, but its design is rooted in something even more fundamental – the earth on which the building stands.

Bishops See, the 10 storey building at St George’s Terrace in the city centre exists on a site of historical significance for indigenous communities. Through working with indigenous activist, educator and creative force, Dr. Richard Walley, the Woods Bagot team learnt the cultural meaning of the land. This particular site was designated by indigenous communities to be one of ‘no warfare’. Drawing from ‘six seasons belief’ the Woods Bagot team paid tribute to the time of the year when, at the end of the winter months, the bushland would be burnt and new growth would be stimulated, a time of change and new possibilities.  As the redesign signified a point of change for KPMG the working mantra for the project became ‘Regeneration for the next generation’.

The palate and materials selected were inspired by the WA landscape, earthy tones and ashy black and grey invoking images of blackened timber being burnt from trees. A smoke graphic etched on glazing is contrasted with deep greens of the upholstery to connote new growth.

A centerpiece of the project is a vast curved timber wall in the reception. Visually aligning with a spacial concept of curves and connecting circular symbols the wall, constructed in steam bent American black walnut, is a homage to the naturally carved rock faces found along the Western Australian coastline, most recognisable at Wave Rock. Spanning the full height and length of the reception, the wall dramatically curves and subtly suggests that it has formed gradually over time.

The wall was conceived and created by Perth based designer Jack Flanagan. Given the strong core theme of the overall design of the interiors, and aware of Flanagan’s reputation for passion and care for his work, the Woods Bagot team felt confident enough to give him an open brief for a bench seat joined to the wall.

Flanagan said of the challenge “After narrowing down the organic form of the wall, I brainstormed a number of potential manufacturing techniques including machining timber profiles to make up the overall shape. The final solution was to steam bend the timber strips onto a metal frame to allow the form to look as organic as possible”. In selecting a material the first consideration for Flanagan was the ability of the timber to bend efficiently. This led him to choose between American white oak and American walnut. The smooth grain and deep chocolate tones that complemented the core colour palate of the project meant American walnut was settled upon.

Flanagan was rigourous in his testing of the capabilities of the walnut “We had to see how far we could push the material in the steam bending process. Because every strip of walnut was steam bent and twisted to a different length and shape we could not use supporting jigs so we did have a number of breakages around the particularly tight curves if the grain wasn’t straight enough”.  The outcome is a triumph. The flowing form of the wall and seat is both visually impactful and comfortable. The complex structure is satisfyingly combines modern fixings with timber bending techniques that date back hundreds of years.

The project is a fine example of how a strong and unifying concept, rooted in truth and history, can produce an exceptional design.  A just tribute to the story of the site. 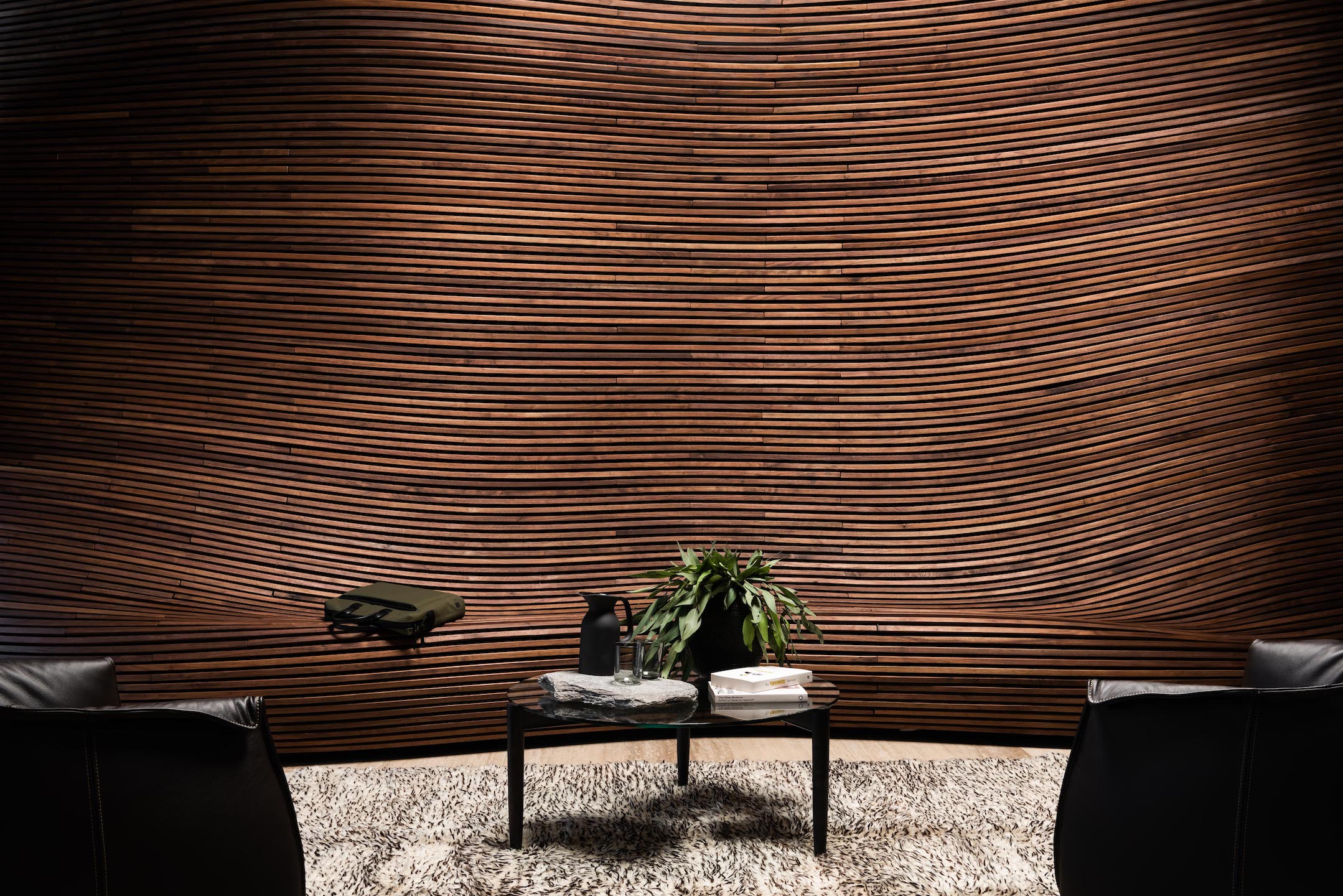