Today, conscious consumer expectations and changing trends set the bar high for the entire furniture market and the home furnishings industry. Polish designers and furniture manufacturers are increasingly looking for new ways of obtaining quality materials that can be used in new design processes. This autumn, the American Hardwood Export Council (AHEC) will present an unusual project in collaboration with the renowned Polish furniture designer Tomek Rygalik. The main objective of this venture will be to show the potential of the beautiful and highly sustainable material American red oak.

A look into the manufacturing process of the chair

AHEC has been promoting species of American hardwood all over the world for over 20 years and regularly support international projects with renowned designers and architects. The effects of their work can be seen, among others at the London Design Festival, the Interzum furniture fair in Cologne, or the Salone del Mobile in Milan. Poland is another important stop on the route of promoting sustainable material, because our country has been the European leader in furniture production for several years. Collections of Polish companies and individual designers are more and more visible not only on the domestic market, but also abroad. The creators of innovative concepts with the "Made in Poland" label regularly search for both quality materials and an alternative to obtaining them and an attractive price. In this context, AHEC would like to present the possibilities of one of the most important species in its portfolio - American red oak.

“American red oak is not only the most abundant wood species on the American continent - it is also the most sustainable. In our opinion, it is rarely used in Europe, so together with Tomek Rygalik we want to show the possibilities of this wood and inspire. In Poland, the project gives us the opportunity to cooperate with highly qualified workshops that are ready to focus on the material. I think that this is an extraordinary opportunity to work with unusual material, get to know a different quality and approach to design”, explains David Venables, AHEC director for Europe.

The real answer to the need for "sustainability"

The forests of the eastern part of the United States are a wealth of temperate zone species. The natural annual growth of each species of American hardwood significantly exceeds its annual harvesting, and the ecosystem is ideal for vast amounts of wildlife. It is a resource that other continents can envy, which also creates huge business opportunities.

Most species found in American forests can be used in many ways, from furniture production to innovative architectural solutions. An Inventory of Forests Analysis shows that the volume of American red oak covers 2.48 billion m3, which is 18.7% of the total number of temperate hardwood species in the United States. The natural annual growth of the red oak is 55.2 million m3; every year, it is cut to 33.9 million m3. In turn, Forest Inventory Analysis shows that it only takes 0.57 seconds for the regrowth of 1m³ of this species of wood!

American red oak grows in the mixed hardwood forests across the Eastern part of the United States. Its wood is characterized by a distinctive grain pattern and not necessarily red in colour - the name of the species came from the intense colour of autumn leaves. The shade of the wood itself is very much, from the natural colour of the oak, to the intense, warm colours. It is a widely used material for the production of furniture, doors, floors as well as carpentry elements. It is durable, sustainable and allows for many design applications – reacts well to various finishes, has excellent steam bending capabilities and can be thermally modified for external use.

“I decided to collaborate with AHEC primarily because of the values ​​that stand behind this project. They take into account the idea of a ​​conscious, responsible and sustainable processing of raw materials, guaranteeing the smallest possible carbon footprint. At a time when our planet requires decisive action on the human side, ecological design, especially wood, a material very close to me, becomes extremely important”, says the designer, Tomek Rygalik.

A European take on things

European designers and furniture making students across Europe have been working with American red oak, thanks to AHEC. For the last few years, efforts to establish red oak as a timber with huge potential in the market have resulted in a broad range of applications. Furniture design and making students at the Building Crafts College created a variety of tables using 2 cubic feet of red oak; students of the Rycotewood Furniture Centre in Oxford designed unusual storage furniture, where they used a variety of techniques such as planning, steam-bending, oiling and staining the timber. The final results included a coffee table with a miniature oriental garden under glass and a shoe cabinet using interlaced veneer strips of red oak; architect Michael Jones from the studio Foster + Partners designed the new Bloomberg headquarters in London with bespoke flooring and wall panels using American red oak and this spring in Milan, red oak was dyed pink by Sebastian Cox and architects Chan + Eayrs, using an experimental technique, and crafted in to a beautiful bar for the Wallpaper* Handmade exhibition.

The collaboration between AHEC and Tomek Rygalik will take place in September 2019 - this is the first joint project with a Polish designer. Tomek Rygalik is responsible for the concept and design of the chair and the prototype is made by the Swallow's Tail Furniture brand. The collaboration is part of the global AHEC activity, which for over 25 years has been promoting American hardwood globally. The core of various initiatives is to highlight the efficiency and design potential of hardwood and to pay attention to proper management of the raw material and sustainable cultivation of forests. The Polish project will bring to light the vast potential of American red oak and will present a personal view of the material of the designer Tomek Rygalik. 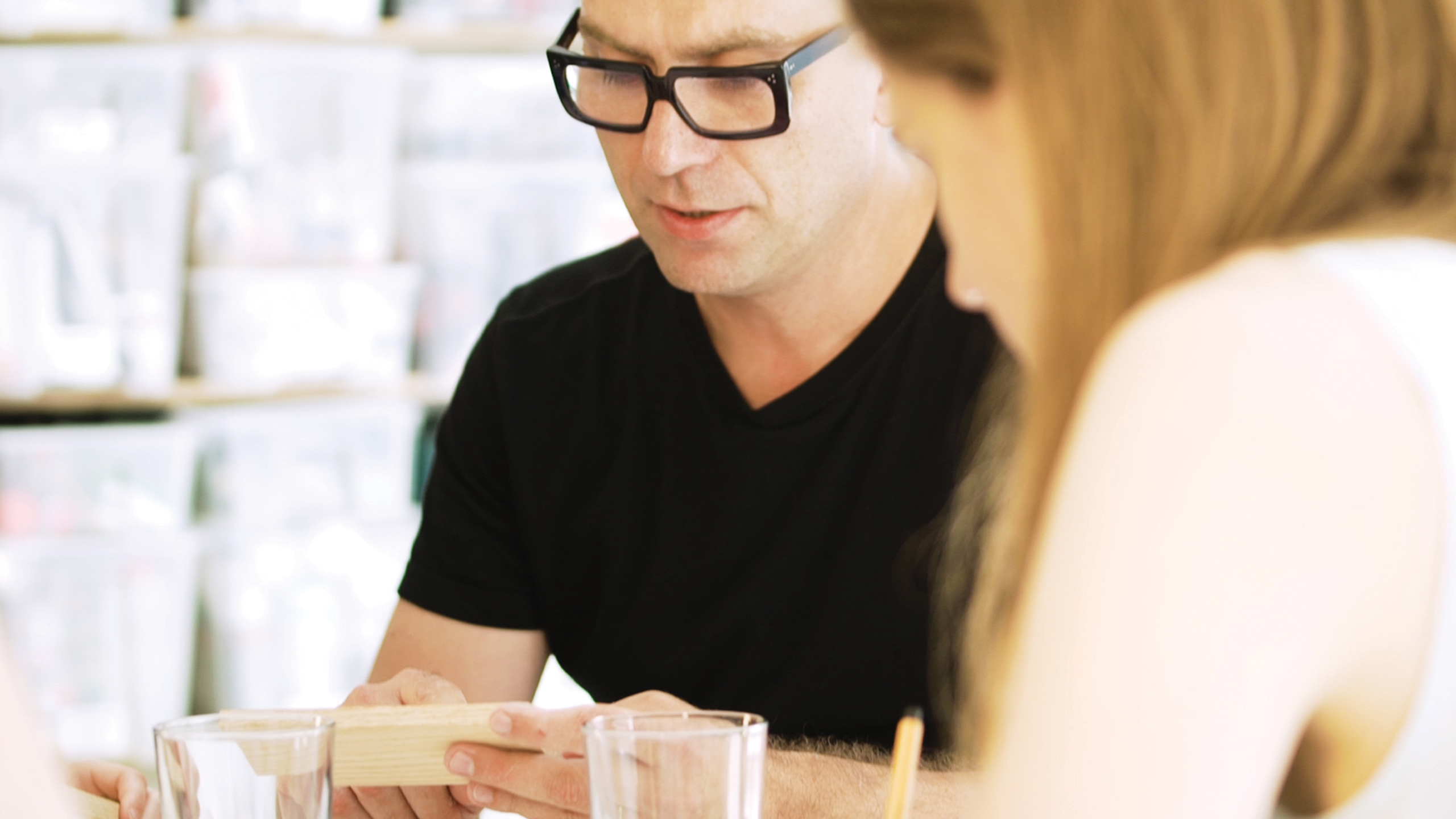 Studio Rygalik, established in 2006 by Tomek Rygalik, delivers complex projects of diverse nature. The spectrum of activities undertaken by the Studio is very broad – from designing, developing and implementing products, to site-specific and design & build deliveries, from limited series to experimental pieces, to comprehensive culinary sensations and workshops exploring the relationship between design and food. In addition to working with the industry, which is among the key areas of its operation, Studio Rygalik frequently engages in projects for cultural institutions that allow experimental discovery. Works completed by Studio Rygalik include projects for the following brands: Absolut, Artek, Cappellini, Comforty, Dupont/Corian, Ghidini, Heal’s, Heineken, Ideal Standard, IKEA, Moroso, Noti, Paged, Pfleiderer, Profim, Siemens; for institutions such as BOZAR in Brussels, the POLIN Museum in Warsaw, the Grand Theatre – National Opera in Warsaw, as well as furniture dedicated to the Polish presidency in the EU. Over the last few years the Studio has presented its works in Berlin, Dresden, Frankfurt, Lodz, London, Milan, Munich, New York, Tokyo, Poznan, Paris, Warsaw, Valencia, and Vienna. Selected projects have also been reported on in international magazines, including: Icon, Interni, Wallpaper, Experimenta, Blueprint, New York Times, Financial Times, and Forbes.

Designer, lecturer, curator, and PhD in Arts. Studied architecture at the Lodz University of Technology and graduated from the Faculty of Industrial Design at the Pratt Institute in New York. After completing the master’s programme at the Royal College of Art in London in 2005, Tomek became a member of the R&D team at the RCA. Established Studio Rygalik in 2006. Tomek runs the design lab at the Department of Design at the Warsaw Academy of Fine Arts. He works with Moroso, Noti, Comforty, Paged, Ghidini, Cappellini, Profim, Ideal Standard, Siemens, Heineken, and IKEA. Since 2010 Tomek has been the creative director for leading Polish brands. He has completed projects for a number of cultural institutions, including the Adam Mickiewicz Institute, National Opera, POLIN Museum, BOZAR, Zachęta, Fredric Chopin Museum, National Museum, and Institutes of Polish Culture. He was also the architect of the Polish presidency in the EU Council. Many of his projects have been included in the permanent exhibitions at the National Museum in Warsaw. In 2015 Tomek established his own brand – TRE Product, and from 2016 he has been co-running the SOBOLE creative campus.

The Swallow’s Tail Furniture brand has been created and developed by two graduates of the Wroclaw Academy of Fine Arts: Magdalena Hubka and Piotr Grzybowski. They have been designing furniture since 1999, but they only started building their own studio in 2012 to launch the Swallow’s Tail Furniture two years later. Their furniture designs are real masterpieces – all conceived with a strong concept and passion; maturing similar to quality wines, they are developed with a great attention to detail and commitment of an entire team of designers, builders and technology experts. The development process refers to the values of design which have become slightly obsolete over the last decades, such as naturalness, authenticity, and proximity. The designers at Swallow’s Tail Furniture work to recreate the elusive art of craftsmanship, offering modern design ideas. Their furniture collections are made from noble wood species, with functionality and quality built into the construction process.