The objective of MultiPly is to demonstrate that engineered U.S. hardwood products can make a significant contribution to new generation timber construction. European Director David Venables spoke to journalist Mike Jeffree about the origins of the project.

David Venables: We’ve now been involved in a series structural timber projects for the LDF: Sclera designed by Sir David Adjaye, Timber Wave by AL_A Architects, the Endless Stair by dRMM and, of course, The Smile. It’s a valuable platform and generates tremendous publicity for U.S. hardwood. But each has also been a practical experiment; each started with a hypothesis then developed a methodology to make it reality, and ultimately produced conclusions and data that inform the debate on the application of timber and mark a progression. The Smile demonstrated how far you can push hardwood CLT; that you can produce industrial-scale structural panels which perform superbly. But it left unanswered questions about the hardwood CLT production process, its cost efficiency and market application.

MJ: Was MultiPly also informed by the direction of house-building more generally?

DV: Certainly. We looked into growing discussion around prefabricated and modular construction as quick-build, quality solutions to help tackle the mounting housing crisis, particularly in urban areas. We also took on board developments in softwood-based housing for offsite construction and the involvement of companies such as Ikea and L&G. There are so many areas where new generation modular timber construction can fulfil a role. We felt that if we linked into that, it would bring our journey so far in the structural use of U.S. hardwoods up to date and make it even more relevant.

MJ: What was the rationale for choosing tulipwood for The Smile and MultiPly?

DV: Tulipwood suggests itself. It’s one of the most prolific U.S. hardwoods and demonstrably renewable. It comprises 7.7% of U.S. hardwood growing stock and, while 12.8 million m3 are harvested annually, over 32 million m3 grow. We also recognise that, however impressively hardwood CLT performs, however architecturally innovative our projects happen to be, the solutions we put forward must be affordable and tulipwood is the cheapest U.S. hardwood. We’ve also made it more cost effective still by using lower grade 2 Common lumber, which you can do in engineered timber without compromising performance. The aim is to demonstrate it can be adopted in the real world of volume timber construction where softwood fits so easily. 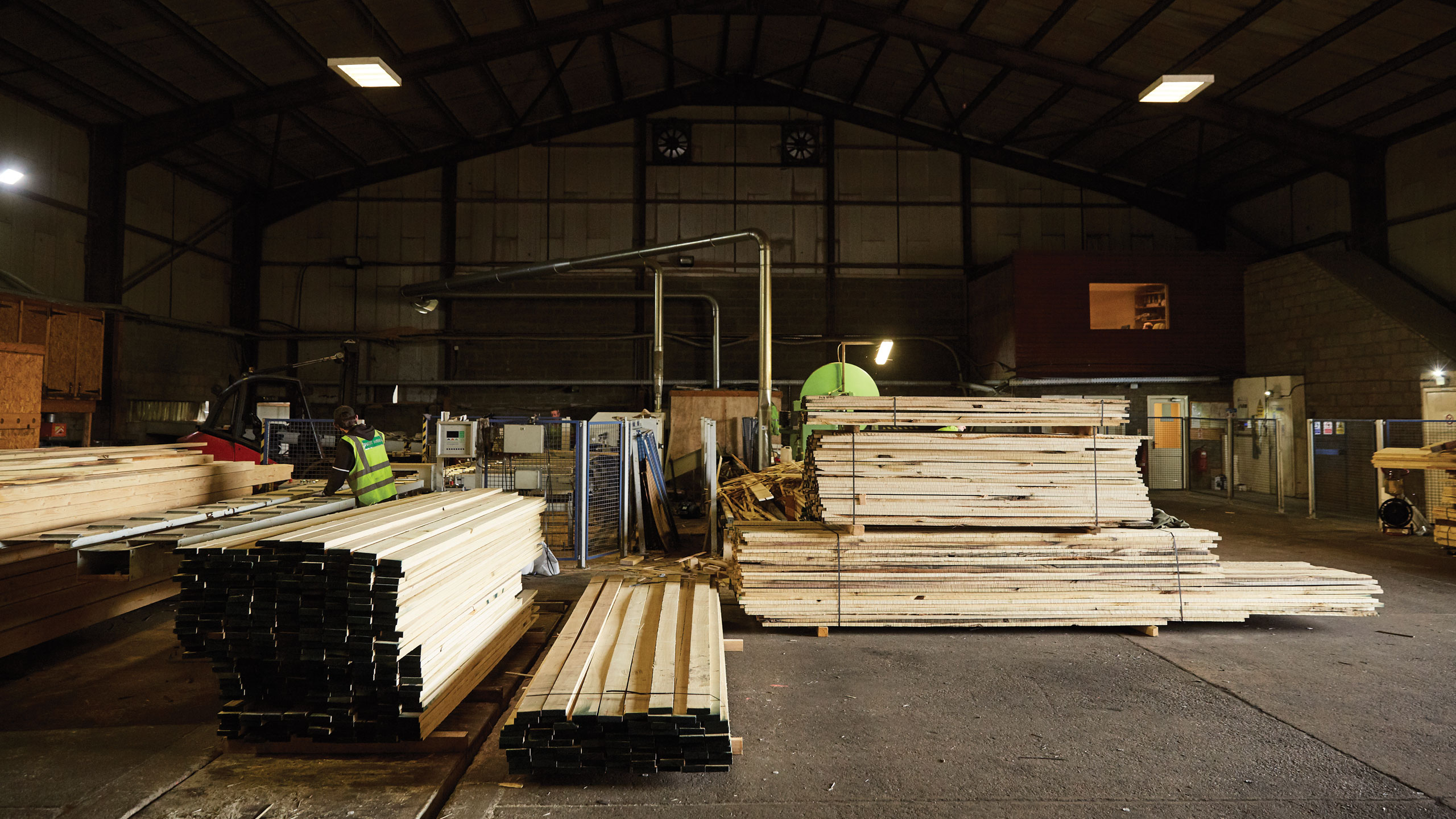 MultiPly began it's life as three containers of mainly low grade tulipwood, shipped from AHEC members in the U.S. to Glenalmond Timber in Perth.

MJ: How does tulipwood compare technically with other structural materials?

DV: That’s another factor in its selection. It’s relatively lightweight, but the old adage that the denser the timber, the stronger it is doesn’t apply. Tulipwood has a phenomenal strength-to-weight ratio and MultiPly will show this even more transparently. We’re doing more performance testing on this project than ever, and it’s already generating more robust data and technical values than we’ve had before demonstrating the species’ structural capabilities. Architects and engineers won’t need to just take our word for it, they’ll have the numbers behind the whole project.

MJ: How did the partnership with Waugh Thistleton on MultiPly come about?

DV: Of course, we knew of Waugh Thistleton’s catalogue of pioneering work in timber construction, notably in cross-laminated timber. I also attended the Netherlands timber construction event Houtdag where Andrew Waugh was presenting. Afterwards we discussed AHEC’s various projects in this field, including dRMM’s Maggie’s Centre in Oldham, the first building to be constructed wholly in hardwood CLT, which he admired. I also mentioned we were thinking about a project for the 2018 LDF, possibly involving quick-build construction, which chimed with his comment, ‘that you don’t so much construct a timber building, as assemble it’. Without hesitation, he said he wanted to be involved.

MJ: What have been MultiPly’s challenges?

DV: It may look a simple structure, but our engineers Arup, who also worked on The Smile and Endless Stair, say the structural pathways make it our most complex project yet. It’s also the first installation in the V&A’s remodelled Sackler Courtyard, which Arup engineered too, and which now forms the roof of galleries below ground. While MultiPly had to be robust enough to safely accommodate dozens of visitors, great care had to be taken that it did not put undue stress on the museum structure or damage the courtyard’s porcelain flooring tiles.

The panels and modules had to be of a scale that they could be carried on trollies through the main entrance archway, with just a small crane used to lift them into place. And the components and panel joints also had to be made ultra-precisely so that assembly, using just steel connectors and a hand ratchet, would be fast and accurate. In fact, contractor Stage One first assembled and disassembled the structure in their factory to make sure everything fitted – effectively it’s the first prefabricated engineered hardwood flatpack building. This has shown that tulipwood CLT can be a real precision product, with panels capable of being CNC machined to tolerances of +/- 1mm. 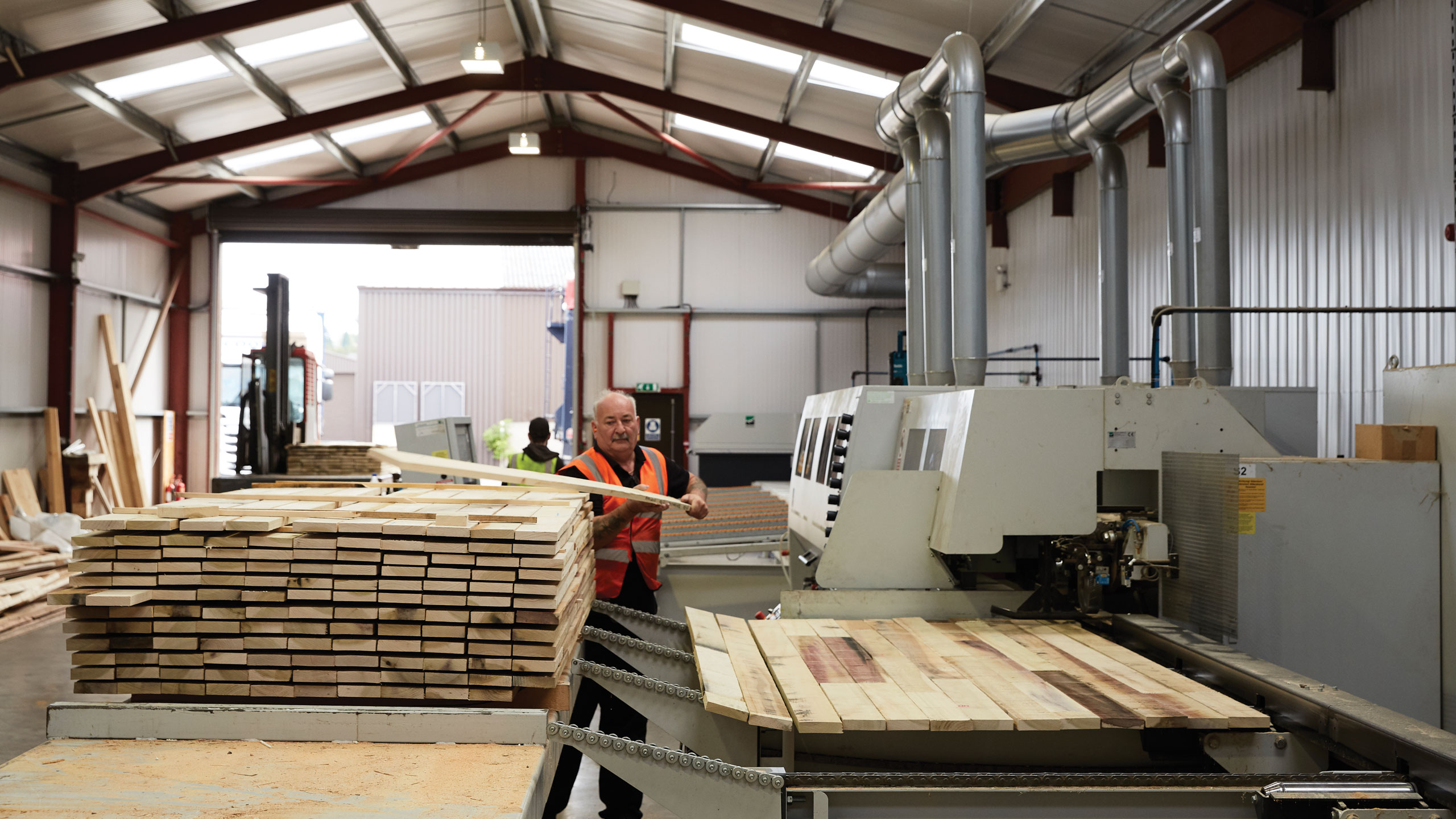 Glenalmond timber graded, cut, finger-jointed and planed all of the tulipwood in MultiPly.

MJ: You worked with other partners on MultiPly, your U.S. timber suppliers, structural timber specialist Glenalmond Timber and the Construction Scotland Innovation Centre (CSIC) at Napier University, which fabricated the panels. What did they bring to the project?

DV:  Firstly great enthusiasm. They also saw the rationale of the project and its potential. We had eight or nine suppliers volunteering the tulipwood. They sent over three container-loads and when we needed more, UK importer-distributor James Latham stepped in.

Glenalmond, a relatively small business, but with a global reputation for its innovative approach, made a huge contribution too, grading, cutting and finger-jointing the timber to the rigorous standards we needed. They also provided data for the life cycle analysis of MultiPly, recording all their energy and materials inputs in processing the timber.

And CSIC did a remarkable job. To date they had predominantly worked with home grown softwood, but they produced the 120 2.7mx2.7m tulipwood CLT panels in four weeks. They also put them through exhaustive strength testing. It was a phenomenal achievement. 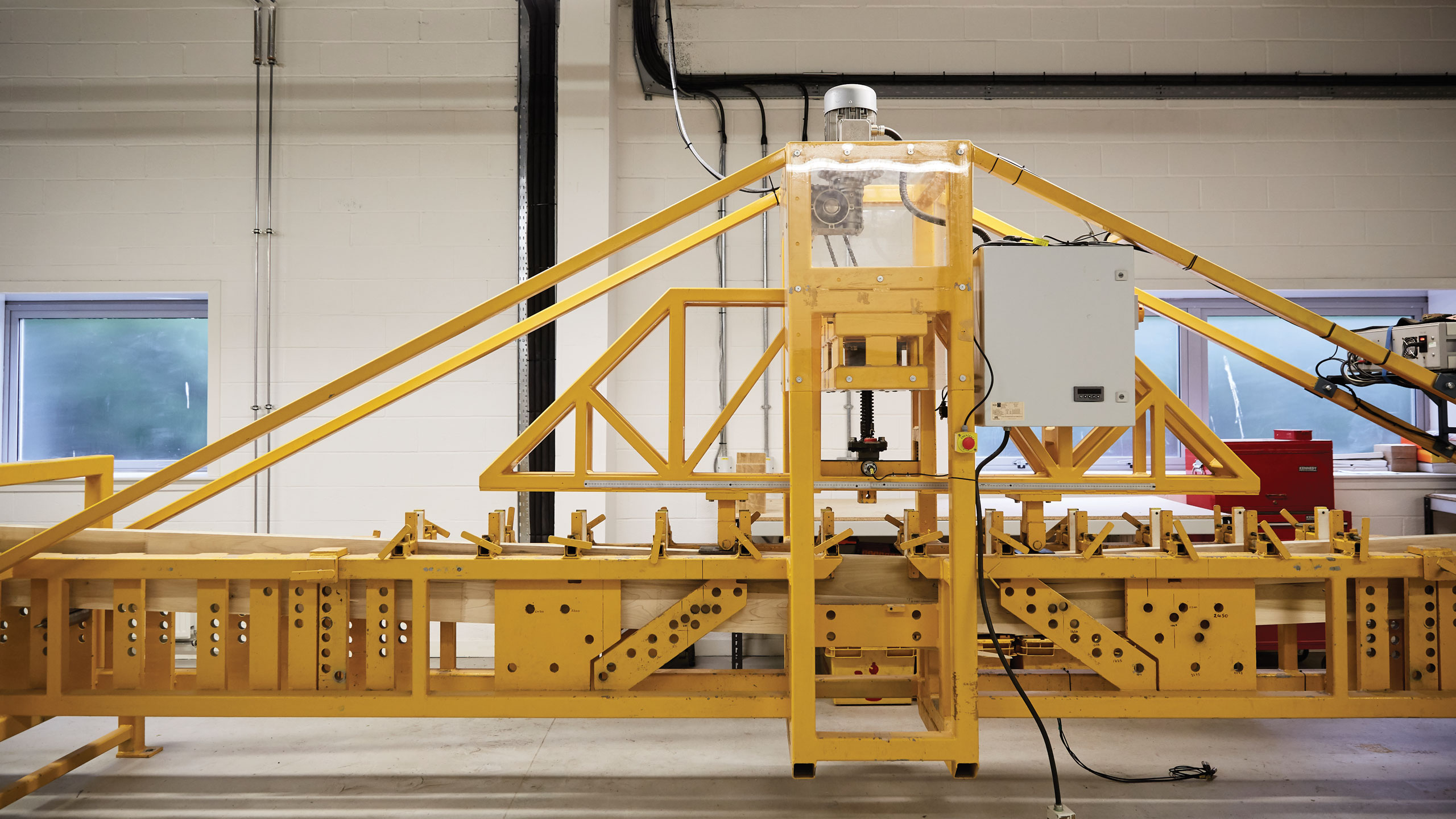 MJ: How significant is MultiPly’s inclusion of an element of thermo-treated tulipwood?

DV: It’s important and was particularly exciting for Waugh Thistleton. Thermo-treating significantly increases timber’s water resistance and is already proven in hardwood cladding. But this the first time it has been incorporated as a protective layer in cross laminated timber.

102 panels were pressed in Scotland by CSIC, making them the first UK-manufactured CLT panels.

MJ: What do you think will be the ultimate impact of MultiPly at the LDF and beyond?

DV: It will firstly underline the potential of tulipwood CLT to the construction sector as an additional structural building material to add to their portfolio alongside engineered softwood products.  And in addition to MultiPly itself, we will also be providing tulipwood demountable modules and half modules as stages and venues for a day of events during the LDF on Exhibition Road, organised jointly by the V&A, the Science and Natural History Museums and Imperial College.

The legacy could also be to add impetus for the development of a larger scale engineered hardwood manufacturing sector in the U.S. itself. Softwood CLT manufacture is already a major international business, with European production alone approaching 1 million m3 a year. There’s no reason why engineered hardwood could not also be a significant industry given the increasing pressure globally to build more housing more sustainably. It would be wonderful if in a few years we could look back and say MultiPly played a part in that development.


David Venables is the European Director for the [...]