Maggie’s blueprint for its cancer care centres is a building that sits quietly in the landscape – a place that instils an air of tranquillity and wellbeing, where people can chat over tea around the kitchen table.

Architects dRMM wanted not only to design the latest Maggie’s in Oldham in wood, but use it to stretch boundaries in timber-based construction. With its core structure in American tulipwood cross laminated timber (CLT), the new building brings together client’s brief and architect’s ambition seamlessly. dRMM is a pioneer of engineered wood in contemporary architecture.

“It began in the 1980s when my siblings and I rebuilt my tree-expert mother’s house in plywood, and the Guardian dubbed me the king of ply!” said co-founder Professor Alex de Rijke. “Then cross laminated timber (CLT) arrived, effectively a ‘super plywood’, and I saw it as a medium to use in the modern context on larger scales and to advocate for ecological reasons; its sustainability, life cycle and carbon performance. People also like living with wood. It’s tactile and timber buildings have a different air quality.”

dRMM went on increasingly to make timber a starting point for projects, using softwood CLT and glulam, particularly in schools. “That put us in touch with Austrian research into timber building’s health benefits, showing children in wood classrooms are calmer and have lower heart rates, as they mimic the psychological benefits of being in nature,” said de Rijke.

Another step in dRMM’s timber progress came with Endless Stair, an installation created for the 2013 London Design Festival (LDF) in collaboration with the American Hardwood Export Council (AHEC). It was a showcase for structural use of engineered American hardwood and the architects’ first experience of tulipwood CLT.

“We were inspired by Escher’s staircase lithographs and, working with Arup, developed an endlessly reconfigurable freestanding structure of interlocking flights,” said de Rijke. “We chose tulipwood as it’s among the most prolific and economic U.S. hardwoods, generally used for furniture carcassing and mouldings. We wanted to transform its status into a beautiful alternative to default softwood and hardwoods.”

dRMM saw the healthcare aspect creating ‘legible resonance’ for using wood per se and large-span American tulipwood CLT panels ideal for the building’s envisaged scale and open airy interior. Maggie’s were also enthused by the idea of building in timber, although initially they didn’t seem to fully appreciate the benefits above and beyond standard CLT. “They asked why not just use standard softwood CLT?” said project architect Jasmin Sohi. “So we explained that the variegated tulipwood and finish quality would allow the wood to be expressed, maximising the psychological and therapeutic benefits of a timber environment. In addition, the structure would feel like a fine piece of furniture. dRMM reinforced its point by holding client discussions around its Wish List table! 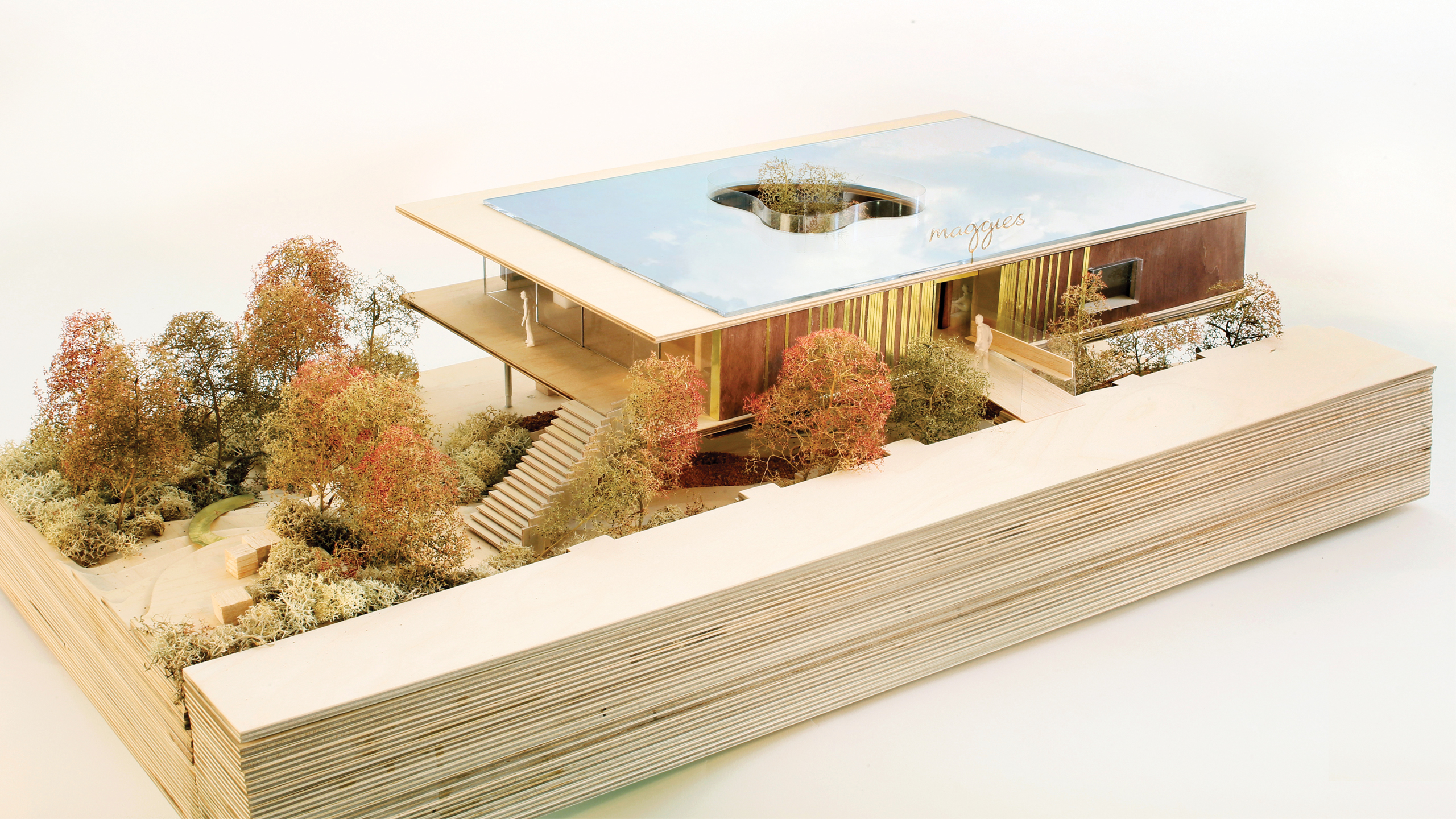 “We stressed too that using such a beautiful timber, which could form structure and interior finish, meant using fewer trades – and it took my aversion to plasterboard into account!” said de Rijke.

Maggie’s also queried the budget impact of using tulipwood rather than cheaper spruce. But while involving some cost engineering, it proved competitive.
A difference between the Endless Stair steps and Maggie’s panels was that the former were handmade, while the panels had to be machine-produced by a seasoned CLT manufacturer. Züblin in Germany was selected.

“It meant interrupting a system mainly set up for softwood CLT, but Züblin recognised the project’s significance,” said de Rijke.

Adding interest, some panels were also curved.  They also included custom cut outs and a routed recess detail so doors could close flush without additional door frames. The centre stands atop 4m steel legs on concrete pads within Royal Oldham Hospital grounds. Its garden slopes down before and panoramic vistas stretch to the Pennines.

“Besides the view and slope, the location was right as it juxtaposes Maggie’s with the hospital, which purports to be a place of healing, but, like others of its era, incorporates environmentally unsound materials,” said de Rijke. “Besides a manifesto to healthy architecture, the Centre is a critique of conventional hospital building.” dRMM summarises its design as a ‘matchbox on stilts, with a hole through the middle, like a cored apple’.  But the concept’s simplicity belies intricacies of design. First the six stilts ‘do some pretty clever things’, supporting significant cantilevers. Above, the CLT panels, which are five-layer, 100mm thick, 0.5m to 12m long and 2.93m high, form a structural element in the single-storey building, with either end comprising of oak-framed glazed doors and windows from Aresi of Italy.

“On one side the CLT wall forms a full-height beam,” said de Rijke. “Opposite, a straight outer wall combines with curved interior walls, separating kitchen, other spaces and services, to act as beam and bracing.”

“We’ve also mounted tulipwood-veneered birch plywood furniture Shaker-style on the west outer wall,” said de Rijke. “It’s one linear joinery package; kitchen units, shelving, seating and a wardrobe.” The building’s ‘hole in the middle’, a curving shape, is enclosed in double glazing from IPIG with a tree reaching up through it. “We wanted to bring nature inside the building - you can walk in the garden below and look up through the lightwell to the sky,” said Sohi.

The curve of the interior CLT walls hug the contours of the glass, and poured resin floors reinforce the sense of flow. The slatted ceiling in the flat-roofed structure is also American tulipwood, made from leftover wood from the CLT fabrication process, ensuring no waste. 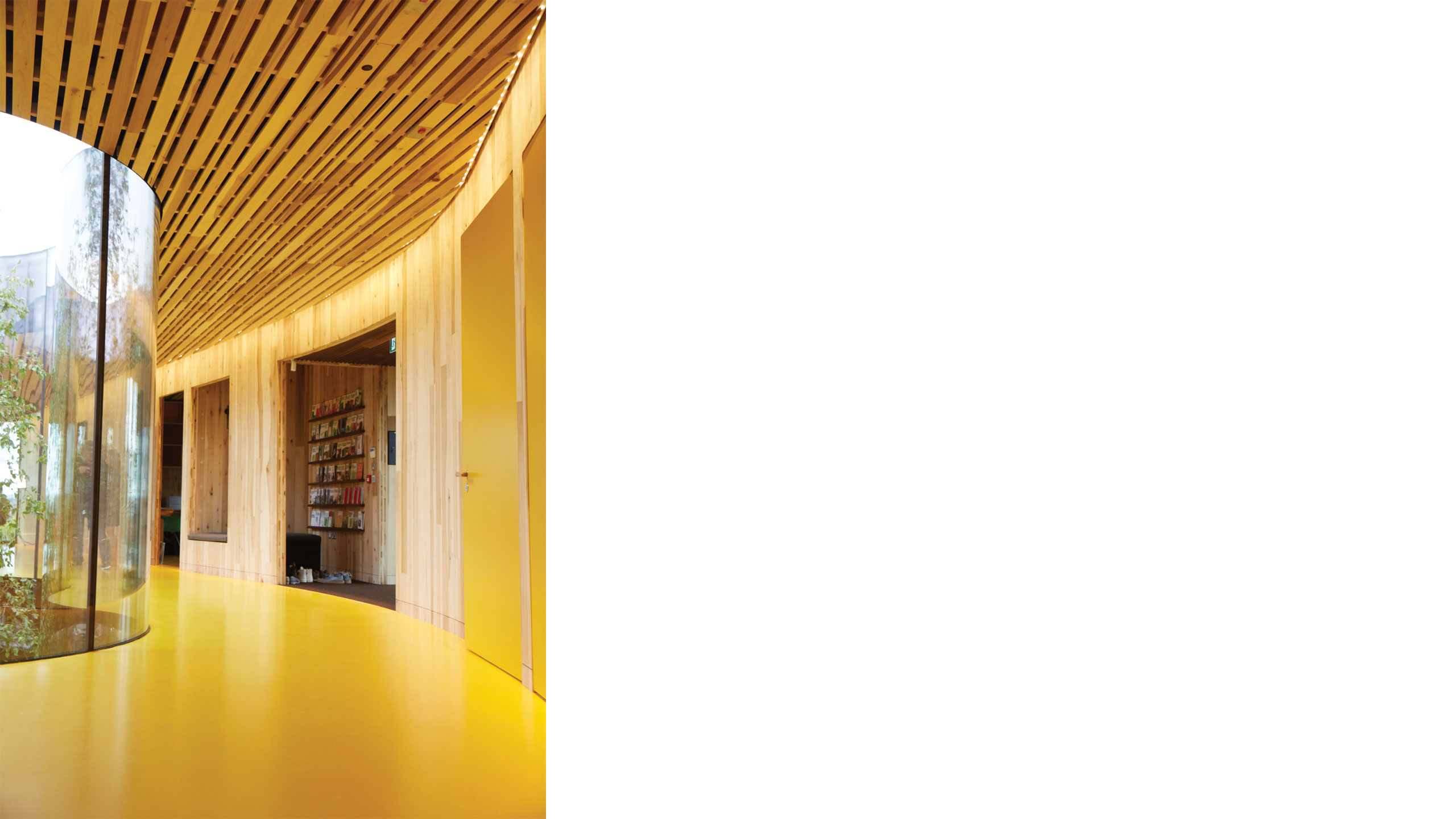 The building is naturally ventilated via stoppable holes in the walls and incorporates a wood burning stove. “But it’s unlikely to need much heating, given the CLT is naturally insulating and combines with Homatherm wood fibre wall insulation,” said de Rijke.

The Centre breaks further new ground by featuring thermo-treated tulipwood exterior cladding. This is created by kilning without oxygen to over 200C, which alters timber at cellular level and imparts superior dimensional stability and durability class 1, equivalent to tropical hardwoods. It’s the first time that TMT tulipwood has been used to clad an entire structure in the UK.

“It was also made to our bespoke corrugated profile by importer-merchant Morgan Timber,” said de Rijke. “This not only casts interesting shadows, it will enhance durability by providing a large surface area to accelerate drying. It’s turned out so well, we’re considering putting it on the market!”

The finished building, which also includes thermo-treated American ash decking, is described by de Rijke as a ‘synthesis between architecture, structure, furniture, landscape and art’. “It’s a modest form but expressive and carefully made and detailed. And the architecture will be completed with a reversible silver and yellow velour and leather curtain by Dutch artist Petra Blaisse, which will define the living area and allow interior spaces and colours to change.”

“It’s the combination of materials, design and surprise created by the lightwell and views,” said de Rijke.

Among those won over is Maggie’s Chris Watson. “Our initial nervousness about using this wood this way proved ill-founded,” he said. “It was an extremely efficient construction process, completed in a year, due to the large amount of off-site fabrication and absence of wet trades the timber structure allowed, and the tulipwood’s grain provides a beautifully warm appearance.”

dRMM itself now plans to use hardwood CLT more, seeing it as especially applicable for university campuses, as well as health facilities. But there’s one more key tulipwood CLT feature of the Maggie’s centre to mention; a large round table, the twin of The Wish List piece, made from a back-up top panel made by Benchmark and recycled CLT sections that were cut outs from the doors, forming the base.

“The kitchen table is central to Maggie’s culture; it’s where staff and visitors sit and talk over a cup of tea,” said Sohi. “Most kitchen tables at Maggie’s are rectangular, but we felt a round one sat better in the structure and was more democratic. “ 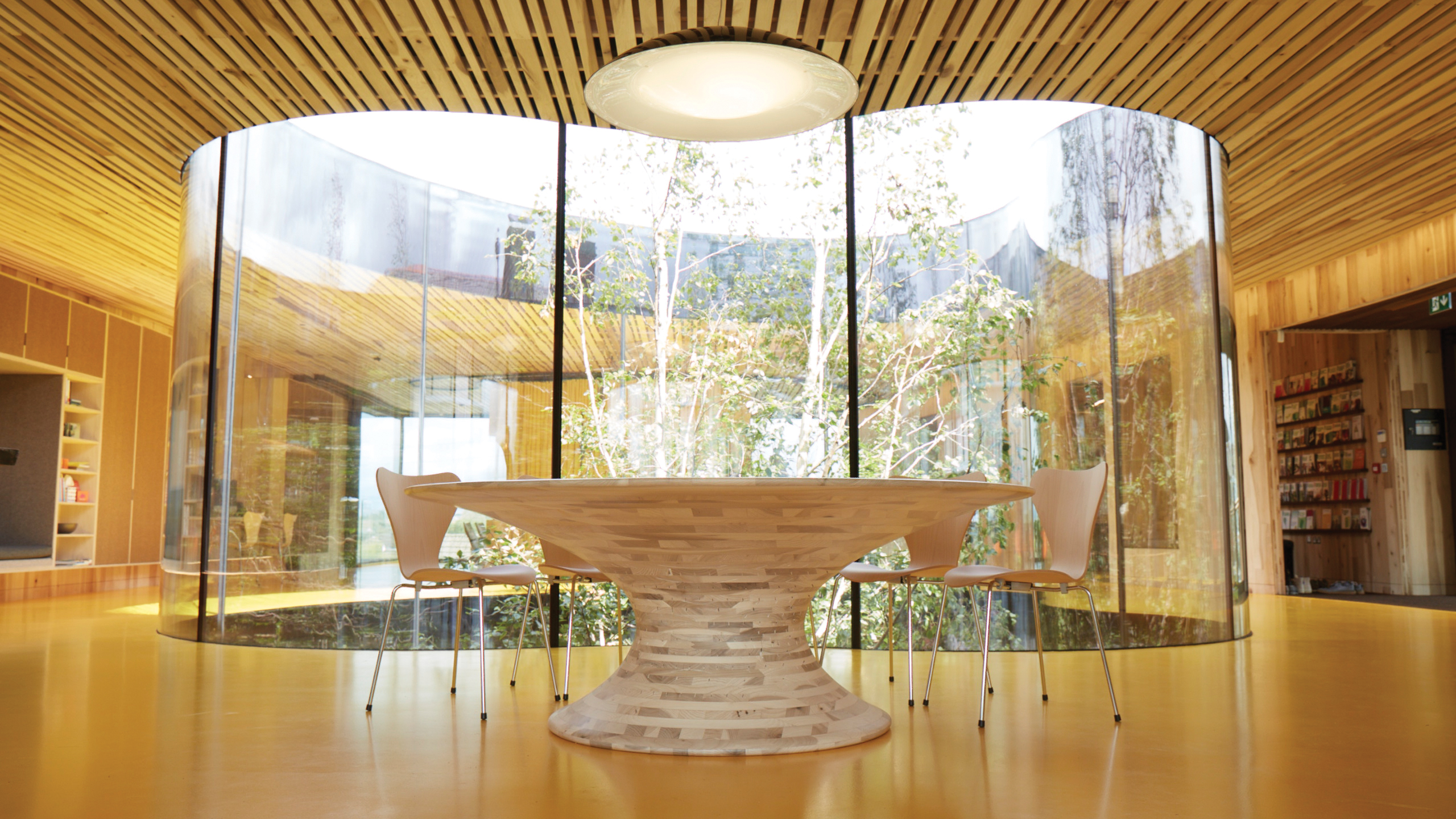 “The original also worked so well and actually helped inform the building design,” said de Rijke. “And including it in Maggie’s is another chance to demonstrate the versatility, creative and performance possibilities of engineered hardwood.”

Time for tulipwood to blossom

Previously most of Middle Tennessee Lumber’s tulipwood output was destined for U.S. mouldings and furniture component producers. Sourcing and processing it for cross laminated timber (CLT) panels to provide the entire structure of a building was a new ball game, but one it relished.

“We were put in the middle of the Maggie’s project through conversations with David Venables of the American Hardwood Export Council (AHEC), who visited our mill in Burns, Tennessee, and then with him and engineered wood producers Züblin,” said international sales manager Eric Lacey. “The U.S. hardwood industry typically sells a random width product, with a range of widths in each package, but Züblin required a fixed 140mm for every board for CLT production. Our ability to select the material and saw to specific width efficiently was critical to our participation.”

The selection of a homogenous material, mostly from forest within 75 miles of Burns, also gave Middle Tennessee Lumber an edge. The experience, said Lacey, has convinced the company there are considerable possibilities to exploit U.S. hardwood’s structural potential. “We see opportunities for tulipwood particularly and we’re very supportive of the development of tulipwood CLT.”

Chief executive Jamey French is equally enthused by the involvement in Maggie’s of Northland Forest Products. The Kingston, New Hampshire-based company supplied its Cambia brand thermo-treated tulipwood cladding for the building.
Thermo-treating, which effectively crystallises the wood’s cambium to boost durability and stability, is a relatively small business in the U.S. compared to Europe, but it’s growing. “We started in 2007 and today we’re exporting 50% of output, using FSC-certified ash and tulipwood,” said French. “Cladding is the biggest market, but it’s also used in furniture, interior panelling and, given its stability, for radiant heat flooring.”

David Venables, European Director of AHEC, believes projects like Maggie’s and, before it, the AHEC-backed The Smile CLT showpiece at the 2016 London Design Festival, will fire further and ever more adventurous use of the species. “It’s prolific, grows faster than spruce and the volume in the forest continues to rise,” he said. “It’s backed with AHEC data on legality, sustainability, life cycle analysis and carbon credentials and, added to that, we’re now seeing its true potential in structural use.”

“It’s prolific, grows faster than spruce and the volume in the forest continues to rise,” he said. “It’s backed with AHEC data on legality, sustainability, life cycle analysis and carbon credentials and, added to that, we’re now seeing its true potential in structural use.”